Skip to content
Finding myself alone at home one Saturday, the mind made a wish to break from the lonely prison walls and embrace nature instead. With no second thoughts, I ringed Vasu to check if he could accompany me on an extemporary trip without any specific destination.
As soon as the other side too placed himself in the same boots, we decided to meet at the railway station within the next two hours to catch the earliest train and decide the place. Finding no trains going to a holiday destination at that hour, we opted out to explore bus journey and the destination was decided in 10-15 minutes. We zeroed on Jog falls.
Jog Falls

As the unplanned trip kicked in, we placed ourselves in the last seat of the Volvo bus which was heading towards Shimoga and the adventurous bag pack journey set forth its path from the Bangalore terminus at 7.30 in the morning. The bus timely reached Shimoga in the afternoon and we had to catch another bus to reach Jog falls, which was around 60 kms away.

The local bus roared away into the scorching afternoon and in parallel cut its way through the bad patch roads and after 90 minutes it did place us in the destination. As the steps progressed towards the falls, I was dumbstruck by the beauty the place carried. Had not imagined to discover such a beautiful backdrop of nature.

The place was quite serene welcoming one with a backdrop of a picturesque set of tall mountains relaxing silently and allowing the four water stream to bathe them. They  were certainly not in mood for a gush bath that they are generally famous for, and thus the disinterested waterfall kept its slow pace reducing its force and volume.

I did encounter many disappointed faces around who actually wanted to catch them at full action and there were few happy souls including me who got engrossed with its beauty and the marvel of the nature as how often does one get to catch a glimpse of nature like this.

There are no absolutely no restaurants around but for few hawkers who were selling snacks and fruits. We did get the shock of life on realizing that there were no sufficient buses for return journey and only one bus existed to pick one between 6 to 6.30 towards Honavar and no buses existed for Bhatkal which lay in the other direction of the Ghat section, where we actually wanted to head to cover Murudeshwara the next day.
Murudeshwara

Being an uplanned trip, we were unsuccessful in booking accommodation in the RNS residency (preferred option), we put ourselves in Bhatkal, which is around 20 kms from the temple. The temple is situated in an extremely beautiful scenic location overlooking the Arabian sea. The whole atmosphere is divine and the Gopuram is quite tall and it does offer the facility to head to the top floor of the gopuram where one could catch the glimpse of the the far stretching blue sea and Shiva in his composed state, certainly relaxing treatment for the eyes.

The majestic Shiva statue sitting engrossed in deep meditation, does pull the mind of the onlookers to a complete rest and as we stand tiny below his foot to look up at him, we realize how magnificent he is. 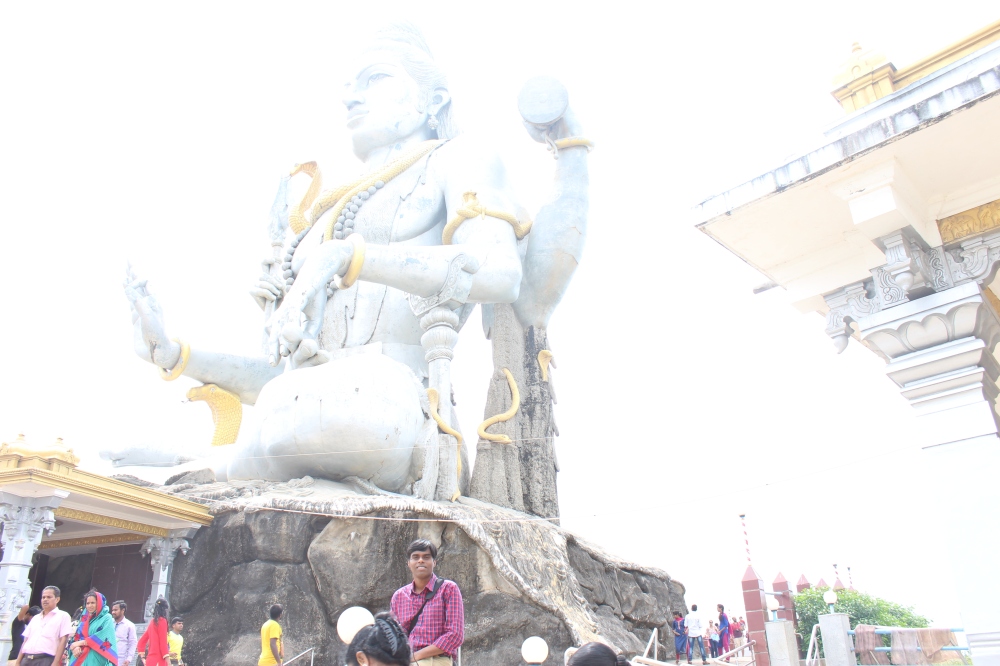 I believe it is one of the tallest Shiva statues in India and it appears as though the Lord is really sitting there and will someday rise up and stand tall to touch the sky. A marvellous place to be in.

After spending decent time at Murudeshwara, we decided to head to Gokarna beach to continue the adventure. After around 2-3 hours, we reached the place. We headed to the beach and must say that the beach is very clean, neat and serene. The spirit which had risen pulled the energy to do a trek walk from Kudle beach to Om beach, covering a terrain distance of 4-6 km on foot. After having covered midway of the distance, the cliff greeted us with a very beautiful backdrop of scenic beauty of the vast water sea bed covered with mountains adjacent to it. 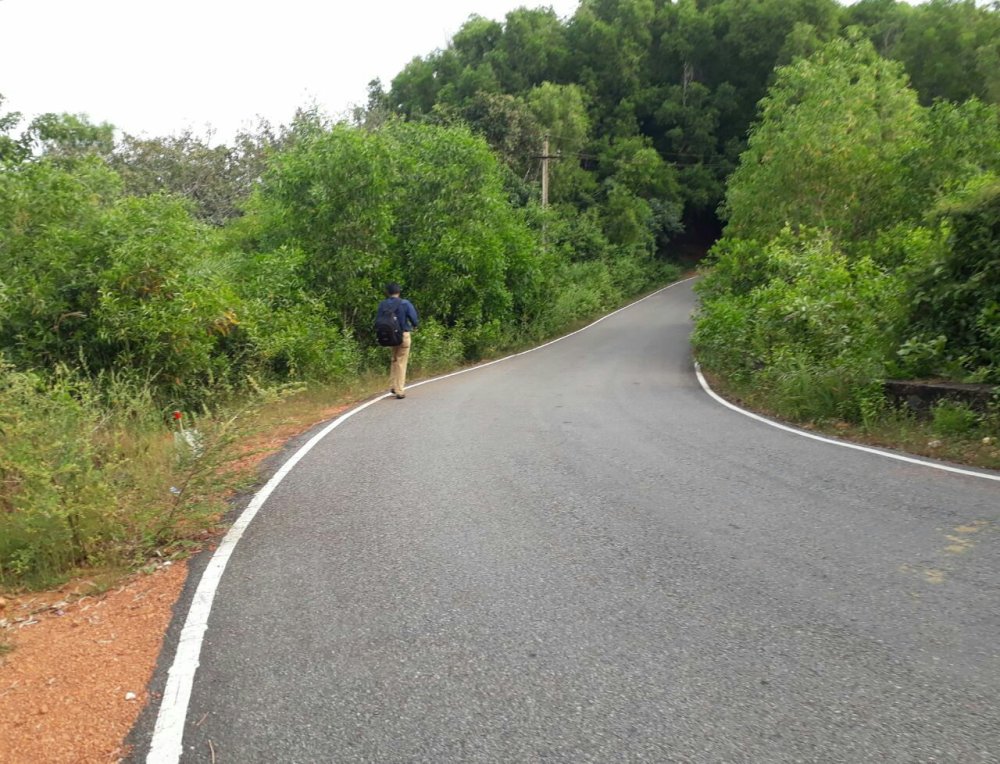 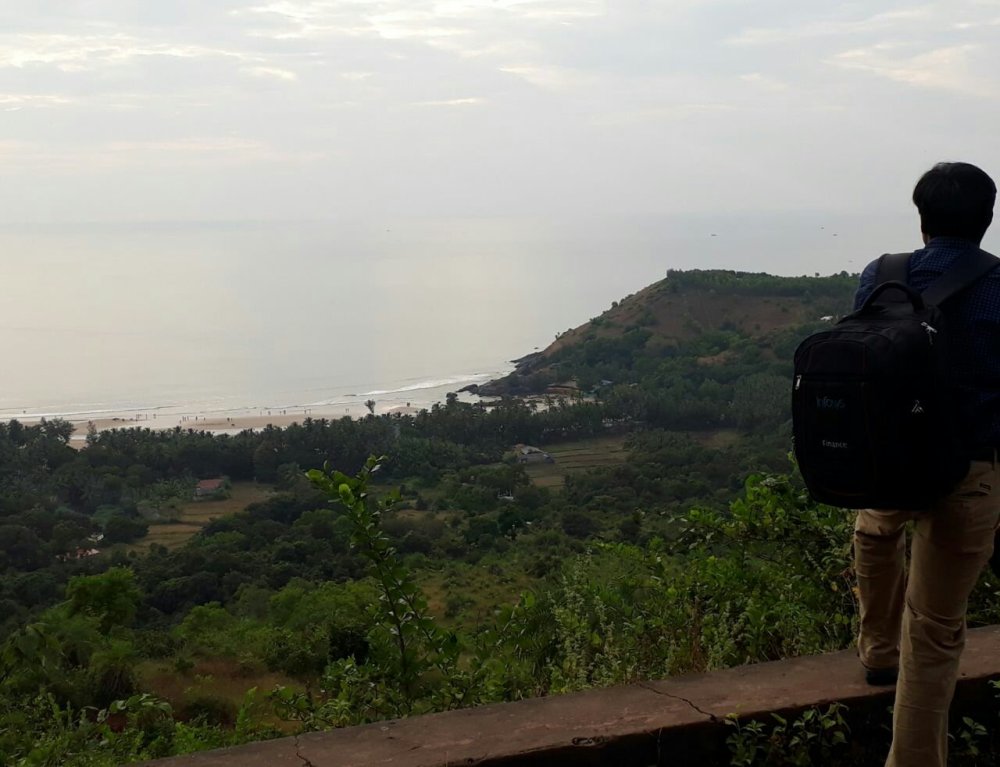 As we reached Om beach, the setting sun added beauty to the blue sea calming it down to turn itself into crimson orange.

What a wonderful holiday it turned out to be. Thanks Vasu for walking the path along and making an unplanned trip to an enjoyable memorable trip.